My run last Saturday morning began like most of my runs that week: in the cold, in the dark and in the rain. I donned my amazing (pink and black) Uglow waterproof running pants and jacket and headed out, “Même pas peur”, as the French like to say. My goal was to limit the run to about 45 minutes at a slow pace, adding in a couple of faster minutes at “race pace” and some hill strides.

I was home, showered and wearing compression socks by 8:30am – about twenty minutes before the rain stopped and the sun peaked out from behind the mountains. The countdown was on to the Ronde du St Marcellin, a local trail race renowned for its spring conditions and most notably its mud, scheduled for the next morning.

I was returning this year to run the Ronde for the second time. The first, two years ago, was the first time I’d ever run 25km – and it had been an instrumental confidence-building moment in my early running days when I was still realizing just how much I love this sport.

I remember a few things from that race: 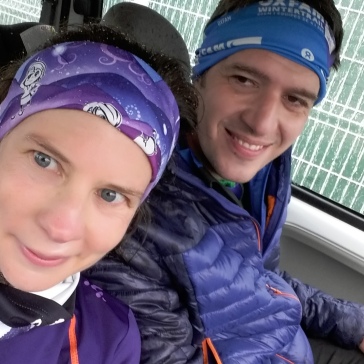 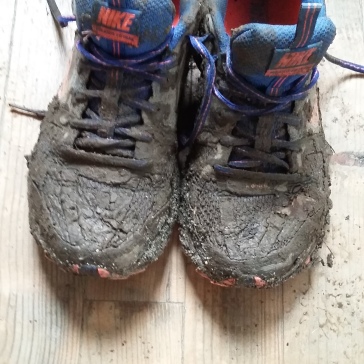 I had nothing to prove coming into this year’s race, other than a desire to better my time from 2016 and measure my progress on a similarly muddy course. I had already clocked nearly 45 weekly kilometres by Sunday and the purpose of this race was to enjoy a long run rather than try to break any personal records.

My friend Céline picked me up at 7:50am and before we knew it we were toeing the line for the 9am start. There were about a hundred runners at the start line – with a terribly disproportionate gender ratio of about 1 to 10, I guessed.

The course was slightly altered from two years ago and was notably run in the opposite direction. The sun was shining and it was a perfect day for race. I had decided to savour the day and as such tried to be mindful about how great it was to be out on this first spring-like day.

Having fun on the course!

The kilometres flew by as my feet and legs got muddier and muddier. I had memories of

very slippery descents, but with a bit more experience under my belt, they didn’t strike me as particularly daunting this time ‘round. Kilometres 10 to 15 were definitely the hardest, but I put on my sunglasses and found myself a nice little bubble to inhabit. 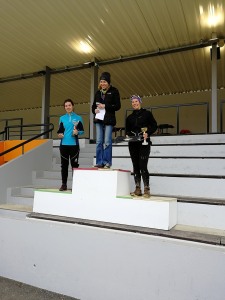 Before I knew it, I could hear the speaker in the distance and there I was barrelling towards the finish line at the local track – approximately 25 minutes faster than two years ago, on a course that was ultimately a kilometre longer and, according to most, a whole lot muddier. It had been a perfect day for a run in the early-spring sun. Winning 3rd place was just the icing on the cake.