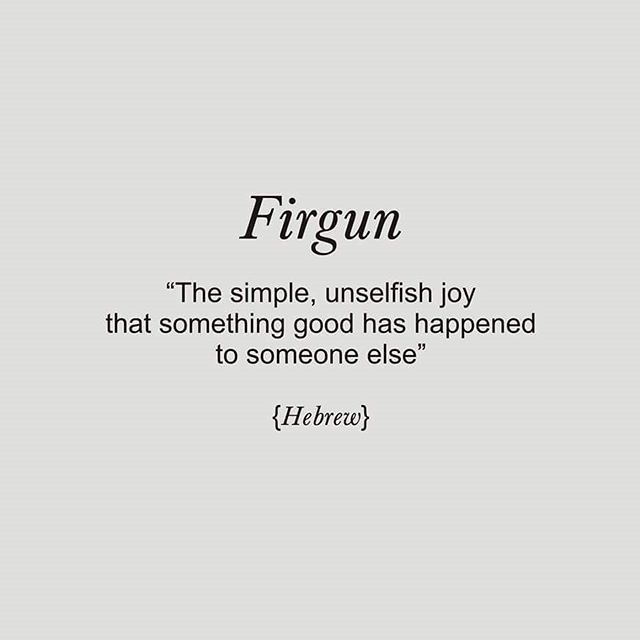 As I’ve mentioned before, I like to read. A lot. When I’m not running, I even earn my living wielding the written word. So, I always love it when I get the chance to add a new word to my lexicon – and it’s even better when it comes in some trail-related form.

That’s why I was so excited a couple weeks ago when I read a new post from the Trail Sisters published on I Run Far. The article was about social media and the pros and cons of being connected, the pressure it can make us feel and the sense of negativity it can fuel in some people when our newsfeeds are filled with the seemingly perfect lives of others.

Nestled in the article, I discovered the word firgun. I actually took out a post-it note and jotted down the term followed by its definition: a modern Hebrew word meaning vicarious and ungrudging joy for someone else.

I had an “aha” moment right there in my office: trail running fills my life with firgun.

Don’t get me wrong, I love being on the trails, pushing myself and even getting a bit competitive at times, but the emotion I feel most often when I see others pushing hard and succeeding with their goals is indeed a sense of complete and ungrudging joy, one that equals – at times possibly exceeds – my own sense of satisfaction when I reach my goals.

The day after my linguistic gold find, my friend (and trail running mentor) Hillary toed the line at the Pierra Menta race, a 3-day stage race totalling 70km and over 7000 meters of vertical in the Beaufortain region of the French Alps. Like its older and better-known winter version (one of the most challenging ski mountaineering races in the world which takes place each March), the race is completed in teams of two.

Hillary had won the mixed race last year but wanted to return to compete as part of a female team. She’s a pretty bad-ass athlete (and an overall rad person), and it’s always fun to follow her spectacular feats and immensely positive attitude. I knew this race was important to her and I quite honestly sat on  edge for three whole days cheering her on. I beamed with pride each time my phone ping-ed with an update on her team’s progress (you could get a text when the teams you followed passed each checkpoint in the race, which was an awesome feature!). I sent congratulations messages by text. I talked about the race with anyone who would listen.

My firgun only grew as Hillary and her teammate Celia continued to excel in each stage and it swelled to new proportions with their final victory on day 3 – 1st women’s team, over 29 minutes ahead of the 2nd place team, and 16th overall. 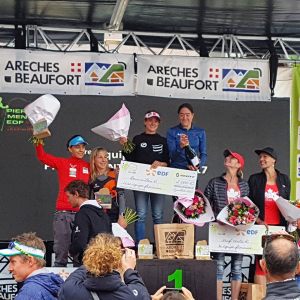 It’s pretty amazing to be part of a community where you can feel so much joy for someone else’s accomplishments. I can by no means compare myself to Hillary and Celia athletically as they are top-notch international level athletes, but I know what it means to put your heart and soul into something and to push as hard as you can. The amazing thing about our sport is that, for most of us at least, it’s not about competing against others on race day, it’s about pushing ourselves to our fullest and getting the most out of life. When I race, I’m not competing with anyone other than myself – and so I can relate to what every single person out there is feeling as they do the same, and I can appreciate how a victory is the accumulation of hours and hours of hard work, grit and perseverance.

And meanwhile, in California

Another trail race took place the week before in California: the legendary Western States 100-mile Endurance Run. There’s a lot of noise around this historic race and all eyes were on Jim Walmsley, who planned on smashing the course record, and Kaci Lickteig, last year’s women’s champion, who was a favourite again this year. The course conditions were brutal apparently, with 18 miles of snow and mud at the start of the race, followed by +100°F temperatures in the canyons, a fact that took a toll on many racers, including Walmsley who dropped out at mile 78.

It was the women’s race, though, that got the firgun really flowing. Kaci Lickteig persevered despite her race not going as she’d hoped. Both Kaci (on Facebook) and Geneva-based Canadian ultrarunner Stephanie Case (in a blog post) have talked about what happened next: Kaci, too, had decided to drop from the race at the mile 78 aid station, when Stephanie rocked up, offered her chicken nuggets and convinced her to carry on.

“Kaci should not have been there. As last year’s winner, she was quite evidently hours off her time, and it was written all over her face. I offered her some nuggets and fries, which she declined, but it seemed to make her smile. We started chatting and she said she was dropping. There was nothing left in her… or so she was trying to convince me. But I knew there was a reason why she hadn’t dropped yet. If she was really done, she wouldn’t still have been sitting there at the checkpoint. I knew the mental gymnastics she must have been playing in her head, and I was convinced she was capable of getting to the end. This was Kaci we were talking about!!! I gave her a speech about how it just didn’t matter what time she came in – she had nothing to prove. Everyone loved her and we were all behind her. So why not just keep going and finish.”

And Kaci to reply,

“I didn’t want to stop after that. I was going up to Green Gate and I told my pacer, ‘We’re finishing. That’s it. We’re going to finish this.’ And we walk in and we finish. And it’s because of [Stephanie Case], getting me up and moving and just how positive she was and she kept saying, ‘You’re an inspiration to me.’”

Case and Lickteig ultimately finished in 15th and 16th place respectively, which is still a great race, but, for me at least, far more impressive than their time on the course was the sense of comradery they showed and how one was willing to put her own race on stand-by to help the other persevere. I’d be willing to bet a lot that both women felt a strong sense of firgun at the finish line.

While I’ve always cheered friends and competitors on, I don’t think I’ve ever been involved in a sport that encourages firgun quite like trail running. Maybe that’s because, unlike many sports, so many unknown elements can come into play on race day – health and training, obviously, but also course conditions, weather, unexpected falls, the possibility of going off-course, heck, losing a shoe in mud or getting held-up by a bear…and so much more. The competition can be fierce, but it is almost always in good spirit and involves meeting new people and sometimes even forging friendships in the process.

How can you not love a sport where, at the end of a 100-mile race (the 2016 Hardrock 100), the two leaders mutually agree to finish hand-in-hand, rather than battle it out in the final miles. As Spanish co-winner Killian Jornet said of his finish alongside American Jason Schlarb,

“We were going together all the way in the night and sharing moments. When we came to the last part, it [felt] unnecessary or strange to push hard to beat someone or to finish in front of someone for two minutes when you have been sharing all the race together. It was nice like that. It was a journey that we spent together. For me in this moment, it was more about the journey of Hardrock than about the performance here. Anyway, it was a big performance…”

Whether at the front, middle or back of the pack, I like to think that everyone out on race day is trying their best and overflowing with firgun – for the winners but also for each smiling face and tired pair of legs that cross the finish line.

PS. You may be wondering about the friend I posted about last time and how he made out in the Pierra Menta, too. Unfortunately, things didn’t go exactly as expected and it wasn’t firgun that I felt, but its equivalent in the form of genuine disappointment when, about the time I was expecting a final ping informing me his team had finished the second stage, I got a message saying that his teammate had fallen and dislocated his shoulder, and that their race was over 3.5km from the end of stage two. My stomach sank and I was at a loss for words, other than “I’m so sorry”. Months of hard work, hours of training, years of practice and it was all over in a split second. But the amazing thing is that they both kept following the race and, despite their dismay (and one very sore shoulder), they continued to cheer and find joy in the race’s conclusion – and they’re already planning their comeback for next year.

Here's hoping we can soon put this virus behind us!
Not all weeks are created equal. Our legs may be tired but our hearts are full after a perfect week at skate ski school. Here's to new friends and fun adventures in the mountains!
Filters are for another day. Today, the light was perfect. There are times to plough ahead and there are times to stop and revel at the beauty in our midst. This is my kind of social distancing.
May you run far enough to find your happy place despite the current state of the world. This too shall pass. So grateful to have cherished this moment within my authorized kilometre and hour out.
There's nothing quite like that "It's 4:45am, snowing and I'm about to run a 112km race through the mountains" feeling.
Today was a pretty fine day. It started with a cranberry scone and ended with an IPA. In between I got in a great visit with @hillary_gerardi and a hike in the mountains with my favourite person. Hurray for summer fun!